Another highlight of the festival is a short lecture by gorgeous speakers.
You can hear practical stories such as the advantages of a minimal life and how to use a composting toilet!

In addition to a free lecture for less than an hour, there was a paid lecture for 3 hours. That’s Bryce Langston and Dee Williams’ special class.

Bryce Langston from Newzealand is best known for his “Living Big” video about Tiny Houses around the world.

He was originally a musician, but one day he was shocked by Tiny House and started to introduce it in a video.
Even before Tiny House was well recognized in Newzealand and Australia, he went to the United States, traveled for several months, met people living in Tiny House, and continued to film them.

After seeing so many Tiny Houses, he actually built one Tiny House each in New Zealand and the United States!

The second half of the lecture, he was asked, “What was the most impressive Tiny House you’ve ever seen?”
I was very happy when Bryce said, “The Tiny House in Japan was compact, and it was wonderful as it was designed for storage and versatile use!”.

▼This is the Japanese Tiny House he was impressed.

Dee Williams, one of Tiny House pioneers in the US, also spoke. 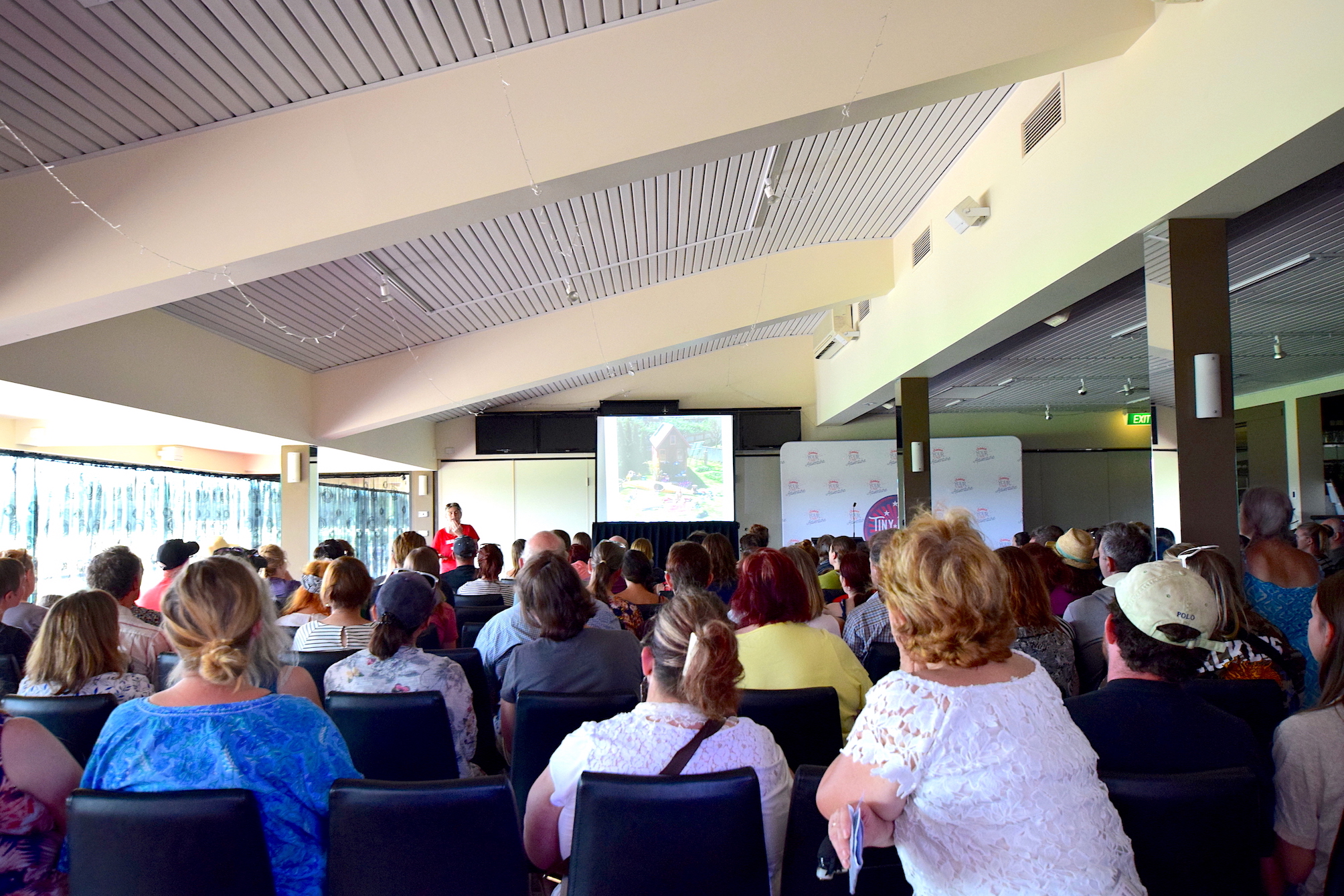 Dee used to live in a big house, have loans, and live comfortably what many Americans call “happiness”.

However, her loved one’s life expectancy has dwindled, and she herself has a heart problem, which has forced her to reconsider her consumption-oriented lifestyle.

Then she reduced the amount of stuff to a minimum, built her own Tiny House with only 8m2 of wheels, rented a friend’s garden and started living there. 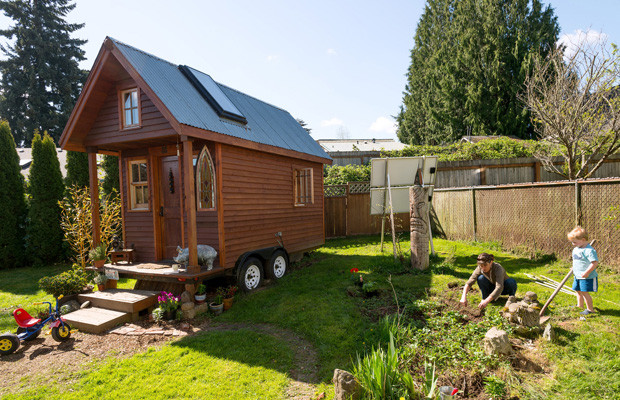 A small house with a compost toilet, a tank-type kitchen, solar panels and a completely off-grid system.

The greatness of nature, the connection with people, and gratitude for them.
Dee’s life at Tiny House was innumerable and invaluable.

Now she has her partner and lives in a small apartment, so she gave her Tiny House to her nephew, who now lives there.

Naturally, the number of people we live together, the way we work, and our health conditions vary greatly depending on the stage of our lives.

Just as hermit crabs change their shells.
You have the freedom to live and change your way of life whenever you want to.

By the way, Dee spoke at TED, and it started with

“I want you to take a second and think about what new purchase, what item would you want to hold in your arms, as you die.”

“What favorite room in your house, or a space, could accommodate that last breath?”

and conclude with the following:.

“And we get this one shot at life.We get this one chance to discover our soul. This is something we all share.”
“Gratitude, humility, grace, there’s not enough of that going around.”

Her messages are condensed, so if you want to continue, check out the TED video.

For Citizenship as a Lifestyle

Australia is gradually experiencing the Tiny House movement.
Compared to Japan, there are many Tiny Houses and they seem to be spreading smoothly, but in fact, it is still a new concept.
As there is no law to deal with this as a permanent residence, the current state of affairs is that “Consultation needed”.

However, there has been a movement to clarify the necessity and merits of Tiny House, such as cost and environmental aspects, and to engage in dialogue without fear. 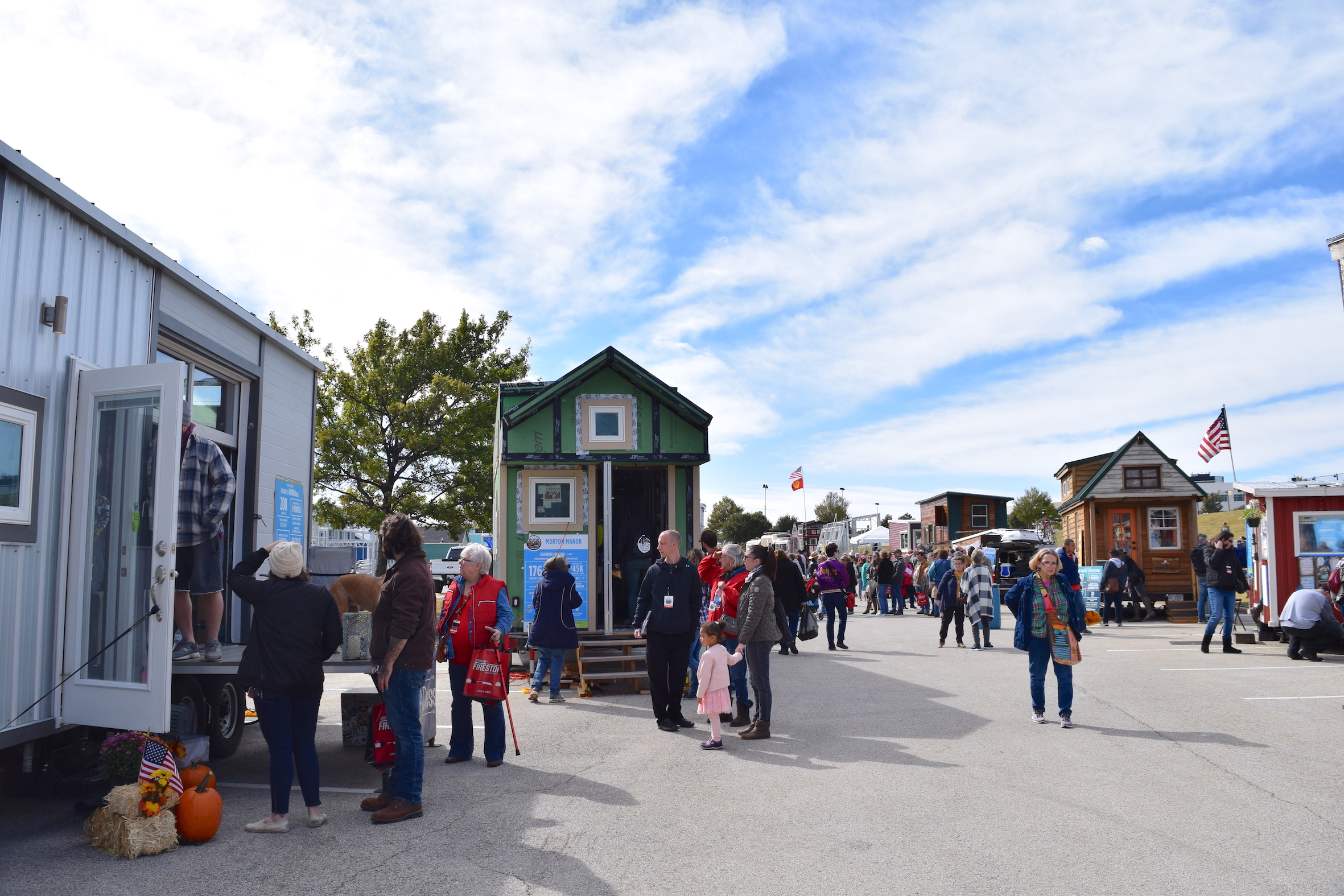 In the United States, many people live in Tiny Houses mainly on the west coast such as Oregon. Now it’s becoming a natural scenery, but there was a lot of dialogue with the administration in the United States at first.

In Japan, people often laugh bitterly saying “It’s a gray zone.”, and criticize culture that has just started to sprout, or the mass media just entertain a new phenomenon like a big boom, get bored and end up just consuming it.

Of course, each country has its own culture, geography, and political background. However, I was impressed by their willingness to pursue the lifestyle they seek without giving up.

I think it was very meaningful that the Tiny House Festival was held in Australia for the first time this year even in a difficult situation.

The Tiny House Festival is already scheduled for next year, and is scheduled for March 21th to 22th, 2020! If you are interested, why don’t you visit?

*The journey to Australia will continue. We will update it soon, so please take a look if you like!

———
▼If you have any questions, please feel free to ask me!

Though the tinyhouse movement is just started in Japan, many people are getting interested as a way of rethinking their life.